The writing and demoing of songs for what would become Kiss Of Life had been an arduous process. It had been frustrated by the sharing of the home studio, the search for a producer, the pressure to have to write with professional songwriters, and by Michael threatening to leave the band and then actually doing so. Gene Loves Jezebel had been lucky to get through it still largely intact, and they were at last looking forward to finally getting their songs recorded.

It was now Autumn 1989, a producer had been found in Paul Fox at San Francisco and the band could enjoy being based in California for the recording process. They were living the other side of the Golden Gate Bridge in Marin County, the studio being in Sausalito.
Jay: Our record company, Beggars Banquet and Geffen in the US, stuck with us and suddenly we were in San Francisco, well Sausalito to be exact. Gazing longingly at the city from the wrong side of the Golden Gate Bridge.
Pete: One of the perks of being in a band is getting to see places you wouldn’t have otherwise had a chance in hell of visiting. And to be in Marin County in autumn/winter instead of grey old England was pretty fab. It’s a beautiful part of the world and I took every available opportunity to explore the area. I was even considering moving up there, at least until the earthquake hit.
James: I loved the time we spent in Marin – three months – it’s so stunningly beautiful there. I had my 31st birthday there. 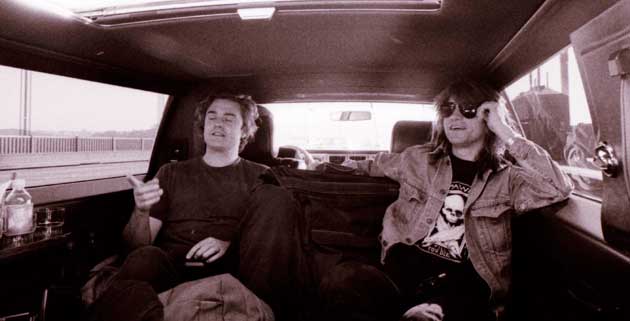 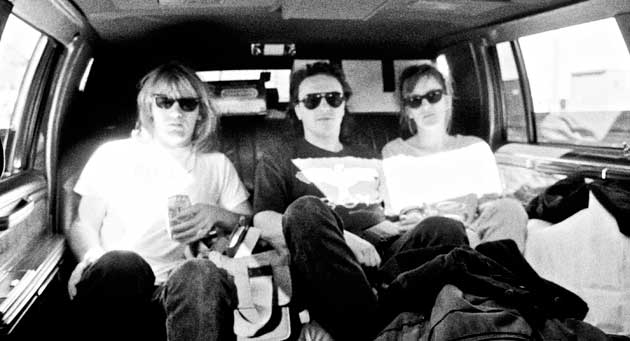 So things were looking good and the band were certainly enjoying the change of scene.
James: We were spoilt. Our own apartments, a rental car, PDs [per diams – a daily money allocation] – all on our unrecouped balance of course, but who was counting.
Recording got underway and it all started off quite well.
Pete: The backing tracks went down quite smoothly with Paul Fox. Rhythmically we basically stuck to what we’d done on the demos and, apart from Paul Fox obsessing over the Jealous drum track, things went quick.

It was during this time in San Francisco, as the World Series was taking place between Oakland Athletics (who eventually became the winners) and the San Francisco Giants, that on Tuesday 17th October the Loma Prieta earthquake struck. This new calamity to impact on the process arrived in a sudden, precise and audible moment.
Pete: The earthquake was quite freaky and very violent. James and I were shopping with our girlfriends in Haight-Ashbury – they’d arrived a few days before – when the earthquake struck. We were just leaving one of the hippy shops and I heard an almighty bang. The street seemed to turn into a wave. All the shopkeepers just stood in the shop doorways, apparently the safest place to stand. We however, ran in circles around our rental car, not sure whether to try to get in it, until we got thrown to the ground. The noise was deafening and there were loud bangs from bricks and roof tiles falling, sounds of windows exploding and the horrible rattling of the electric cable-car wires. I was terrified that they would fall and electrocute us. We drove quickly back to the studio after it stopped.
James: I remember the intense din, the incredible volume of the quake. It rolled, it didn’t shake – and I could see the shop fronts exploding as it raced towards us. Amazing. My girlfriend at the time (later my first wife) completely went to pieces and was a nervous wreck for days.

Some damage was actually caused to the studio but nothing too serious.
Jay: I was in the studio (recording guitar for Why Can’t I) when the earthquake hit. It was almost comical that the Tape Op [operator] badly smashed his leg as he tried to get out of the building by jumping down the stairs.

Caused by a slip on the San Andreas fault, it had been a quake with a magnitude of 7.1, it naturally brought a sense of trepidation to the whole area. The World Series was suspended for a few days and people were cautionary.
Pete: I didn’t realise it was such a major incident until later that night when we went to the local bar in Sausalito. It was situated directly across the bay from San Francisco and normally you’d get an amazing view of the downtown skyscrapers, which were always beautifully lit up at night. That night downtown was pitch black and all that was visible were fires burning in the distance. It was very spooky and felt like a scene from a disaster movie.

This could easily have jeopardised the recordings but the band had gotten this far and weren’t going to let this upset the flow with the recording of the album although it was a time for reflection for Pete.
Pete: The next day the record company offered to fly us out but we decided to stay and get on with the album. My girlfriend had been freaked out by the earthquake and she was terrified of the endless aftershocks so I deserted the band for a few days and drove east to more solid ground. We ended up in Yosemite where it then snowed. 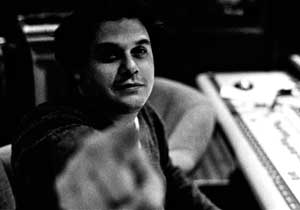 In the meantime unfortunately, Paul Fox’s working methods became more and more frustrating for virtually everyone involved, including the more experienced recording engineer, Jason Corsaro (see pic, above). Perhaps it all began with that drum track on Jealous.
Pete: He spent what seemed like days editing two different drum takes together, instead of just getting Chris to redo the take. It wasn’t really until the vocals and some of the guitars were being recorded that Paul Fox’s production technique seemed at odds with how we heard things.
James: I liked Paul, but his way of working was ridiculous – especially recording some backing tracks. He was pretty green and Jason was an almost legendary engineer. I think Paul, God bless him, was simply out of his depth. 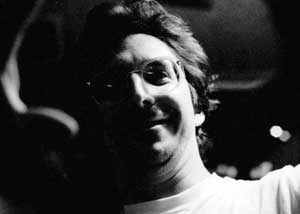 It was a learning experience for Paul Fox (see pic, above), who has since gone on to produce records for The Sugarcubes, The Wallflowers, Grant Lee Buffalo and Sixpence None The Richer, but he would record a backing track in the region of twenty times in some cases from which he would then pick what he would regard as the best bars from each, and make a new whole track, but this was frustrating to his fellow technicians and it was becoming apparent that it wasn’t working.
James: It was worse than not working – it was a joke, a ridiculous way of working.
Jay: Where writing and demoing the songs had been an easy flow, recording was painful. The studio was cramped and not fun to hang around and there was little in the area to amuse. It didn’t help that Paul Fox was just not the right choice for a band as well formed and sure of themselves as we were. I’ll not dwell on that aspect.

In addition to all this, Geffen were also still trying to have an influence on the creative process.
Pete: Geffen’s A&R man thought it would be cool to get Andy Fraser (former Free bassist) to sing some backing vocals on the album. I remember hearing some strange growling noises coming from the studio one morning – it was Andy singing backing vocals on one of the tracks. He seemed to like Two Shadows and had a few attempts at singing along. It sounded very odd and had no relevance to what was happening in the track. It didn’t make the final mix. Somehow I got the job of baby-sitting him whilst he was there and I’d have to drive him to and from the airport and go hunting down his dietary requirements. I think he was a fruitarian, or at least a very strict vegan and we’d drive miles looking for his favourite ‘bird-seed food’. He would call me ‘the Pete’ and I felt like his personal butler.

Then once the recordings were all made, the next stage was mixing the tracks in Los Angeles. Perhaps the sound could be salvaged at this point.
Pete: When we went to LA to mix the album things went downhill further. We’d been using an old analogue desk in Studio D, which had a lovely warm sound, so I thought despite the problems the album could still turn out ok. The studio in LA had an SSL desk, which Paul Fox didn’t seem to be able to get to grips with.
James: The mixing in LA just compounded the situation – Jason had had enough of working with Paul and wanted to go home to NYC. The mixes were a disaster.
Jay: By the time we’d finished mixing in LA, all our fears were confirmed and it was obvious the record was a complete disaster.
Pete: I remember the last conversation I had with Paul Fox. I told him that I thought it all sounded shit and that there was no way we could release the album in that state. I don’t think he knew what to say. He was burnt out by then and seemed to have given up.

So, they were unanimous in their frustration at how the recording and mixing had gone, but once more Gene Loves Jezebel was left distraught, disillusioned and worn out by the process. 1989 was coming to an end and over two years had passed since their last release – the chances of a new album and indeed any future for the band seemed very remote at this point.
Pete: After the fiasco in LA, I flew to Toronto where my girlfriend’s parents lived and spent the last weeks of the 80s in the bitter cold. It was minus 35 and there was nothing much to do, apart from try to stay warm in the basement with a case of beer for company. I think I could only bear listening to the tape of the mixes once. We’d spent a fortune on the album but it sounded awful and seemed totally unsalvageable, so I thought that the band was truly finished. It was the most miserable time of my life.

It seems remarkable after this, but not only was the album saved but it turned out very well indeed.
Jay: Thankfully again, Geffen and Beggars stuck with us and we all headed back to London and Tim Palmer saved the album.

Tim Palmer (who’d produced The Mission and The House Of Love) had been called in to reinvigorate the recordings, but even he wanted to record most of the instrumental parts again.
Pete: I think work recommenced on the album in late January 1990 in London. Tim Palmer managed to salvage some of it but a lot was re-recorded. I wasn’t enthused about being back in the studio and I convinced Tim to keep the bass parts. He wanted to redo everything but I knew the backing tracks had been recorded well in San Francisco. Eventually it was finished and I think it ended up being one of Beggars Banquet’s most expensive releases.
James: We ended up re-recording a lot of it in London with Tim Palmer – although we did keep quite a few of the overdubs from California – including Paul’s keyboards! And some of the backing tracks that worked. Not one of Beggar’s most expensive releases – the most expensive release!

Amazingly, Gene Loves Jezebel finished up with a set of great sounding songs that would make a very nice, varied and well-rounded album. Part Three will look at those songs and the release of July 1990.